Attack of the 3D glasses 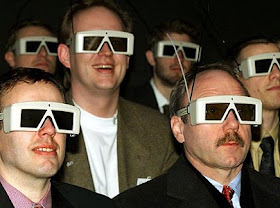 The World moves - develops and we develop along with it.
The World changes its views and we change ourselves to keep pace with it.
The World advances and we again we go along for the ride.
Change is the name of life. Today in the 21st century, life has sped up, nothing is slow. Everything is computerized or a more apt word digitalized. If we don't keep up in this race of competition was lose. We have to adapt to the current conditions if we are to make a place in this world. That, my dear fellows is the mantra of life as we know it.

Well the serious stuff aside, technology has come far from what it was decades ago, when we used large and heavy computer equipments and there were no such things as mini, macro, super computers and chip processors to enable the working ability of the computer.
Today everything is 3-dimensional.
Everything from television, personal computers, video games (more suitable to be called playstations, x-box, wii) and motion cinema. Now, 3d can mean a lot of things. Primarily or in the broad sense, the word 3D or the concept of 3D encompasses three elements of mathematics, specifically length, breadth, height but here we focus on 3D use in technology. The first time when 3D computer graphics....yes computer graphics was used in technology by William Fetter for his work in Boeing. The process of creating 3D computer graphics can be sequentially divided into three basic phases: 3D modeling which describes the process of forming the shape of an object, layout and animation which describes the motion and placement of objects within a scene, and 3D rendering which produces an image of an object. 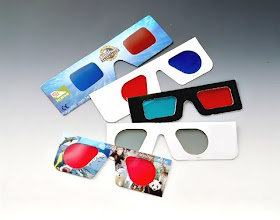 3D computer graphics (in contrast to 2D computer graphics) are graphics that use a three-dimensional representation of geometric data (often Cartesian) that is stored in the computer for the purposes of performing calculations and rendering 2D images. Such images may be stored for viewing later or displayed in real-time. Despite these differences, 3D computer graphics rely on many of the same algorithms as 2D computer vector graphics in the wire-frame model and 2D computer raster graphics in the final rendered display.
This 3 dimensional era of motion picture began in the late 1890s when British film pioneer William Friese-Greene filed a patent for a 3-D movie process. In his patent, two films were projected side by side on screen. The viewer looked through a stereoscope(a special motion picture camera system is used to record the images as seen from two perspectives or computer-generated imagery generates the two perspectives) to converge the two images. Because of the obtrusive mechanics behind this method, theatrical use was not practical. Frederick Eugene Ives patented his stereo camera rig in 1900. The camera had two lenses coupled together 1 3/4 inches apart. The earliest confirmed 3-D film shown to a paying audience was The Power of Love, which premiered at the Ambassador Hotel Theater in on September 27, 1922. 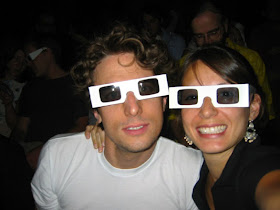 After all these technicalities with a slight tinge of history, 3d has become the GOD OF ENTERTAINMENT today. It seems that everywhere we look these days we see ads for the next big 3D movie. Whether it was 'Avatar,' 'Tron,' or 'Legend of the Guardians,' -- 3D films generally have high-production values and many ads to back them up and make sure they turn out successful. Consumers still get excited of the prospect in seeing these latest movies in "3D." But the tech has been around for a long time -- although in crude forms like the red-cyan anaglyph glasses that produced few shades of color. 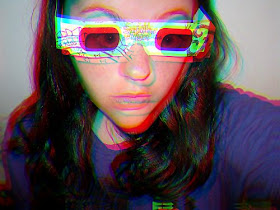 Despite these advances, 3D movies fell out of popularity by the middle of the decade. The reasons for the decline were mostly technical. 3D projectors required two reels to be displayed in perfect synchronization. Small errors in synchronization could easily lead to eye strain and headaches among viewers. Keeping reels in good repair was also an ongoing concern."
But with polarized glasses becoming available for theatre consumption and other improvements in the viewer experiences, as Schedeen points out, 3D movies are now a huge and profitable enterprise despite the higher equipment costs required. New innovations are also becoming a reality like glasses-free stereoscopic 3D viewing through "auto-stereoscopic displays. 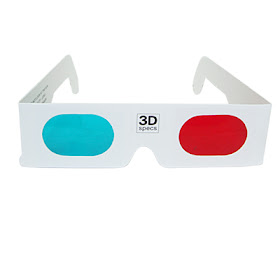 Who or what do motion picture theaters owe their thanks? They owe their thanks to 3D films. In several of the reports produced on this very topic fortify this fact. Avatar was the fourth most cash making movie to ever hit the box office in about 17 days. Researchers reviewed the explanations coming up with how this will occur amid a recession as the one the in currently in. Avatar and other 3D films owe their success to the more expensive ticket costs to pay for the special glasses needed to watch. So with the recent state of ticket prices getting more and more expensive, home-theatre experiences beginning to match the theatre experience, and less people going to the movies these days -- producers and studios are looking at other ways to "reel" viewers in so to speak. Doing this through sensory-and-immersive experiences like stereoscopic 3D is a smart business move for them. Many consumers nowadays will only want to pay premium theatre prices to watch films only to the extent the movie offers a better, or more unique, experience. 3D still hasn't hit it big -- or caught on large -- at the home so the premium certainly is worth it for viewers and techies.
This past year a better version of the 3d tech is catching steam, Digital 3-D. 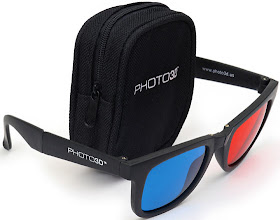 Digital 3-D, which has slowly been gaining steam over the past few years, is finally ready for its closeup. Just about every top director and major studio is doing it--a dozen movies are slated to arrive this year, with dozens more in the works for 2010 and beyond. These are not just animations but live-action films, comedies, dramas and documentaries. Cameron is currently shooting for an Avatar sequel as well as a 3d Titanic. Disney and its Pixar studio are releasing five 3-D movies this year alone, including a 3-D-ified version of Toy Story. George Lucas hopes to rerelease his Star Wars movies in 3-D. And Steven Spielberg is currently shooting Tintin in it, with Peter Jackson doing the 3-D sequel next year.

Avatar was filmed in the old "Spruce Goose" hangar, the 16,000-sq.-ft. space where Howard Hughes built his wooden airplane. The film is set in the future, and most of the action takes place on a mythical planet, Pandora. The actors work in an empty studio; Pandora's lush jungle-aquatic environment is computer-generated in by 's special-effects company, Weta Digital, and added later. I couldn't tell what was real and what was animated--even knowing that the 9-ft.-tall blue, dappled dude couldn't possibly be real. The scenes were so startling and absorbing that the following morning, I had the peculiar sensation of wanting to return there, as if Pandora were real. Cameron wasn't surprised. One theory, he says, is that 3-D viewing "is so close to a real experience that it actually triggers memory creation in a way that 2-D viewing doesn't." His own theory is that stereoscopic viewing uses more neurons. That's possible. After watching all that 3-D, I was a bit wiped out. I was also totally entertained.

Those goggles are not only attacking the motion cinema but our television sets as well. Watching television in three dimensions seems a natural evolution. After all, we see the world in 3D. The difficulty is that, even despite recent advances, some elements of the viewing experience are less than ideal. While the red-and-blue 3D specs of the 1950s have made way for slightly more sophisticated polarized glasses, the fact remains that in order to watch most 3D televisions, you have to wear special headgear. That’s because in order to experience 3D, each eye needs to see the image slightly differently, as in real life, to build a multidimensional picture. Not only that, but the viewing angle for many 3D televisions is quite restrictive, with viewers needing to sit face-on at the correct range in order to see the three-dimensional image clearly. Although this works fine in cinemas, it’s less appropriate for living rooms.

The newest frontier in 3D technology is destined to be the family computer as a new glut of 3D displays and 3D monitors are set to try to enhance the user experience in ways never before imagined but don't expect them to be as affordable as current cheap LCD monitors. Most of the new 3D display technologies build on the current standard for 3D that people are used to seeing in the movie theater. In order to view the 3D images on the computer screen a user must wear a pair of polarized glasses. These are not the old style red and blue filtered glasses, but a newer version of 3D technology that uses a special kind of polarization to separate the images into two parts (one intended for each eye).

And I don’t think I need to elaborate on 3d in the gaming industry and its miracles in that particular arena.

3D has so revolutionized the mode of entertainment today.....that well it’s all about VIRTUAL REALITY.....and if 3D is the way out for the entertainment industrialist to make the big bucks and so be it,
LET THE GLASSES ROLL.
Aparajita Basu
Student
Studies
This is Blog of Students of Center of Media Studies, Institute of Professional Studies ,University of Allahabad. at 6:25 AM
Share